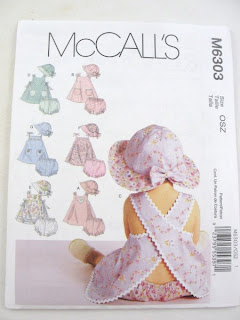 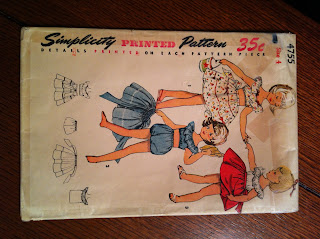 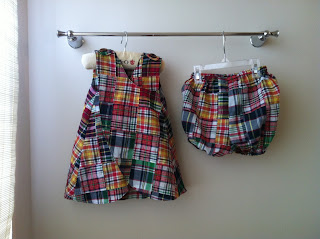 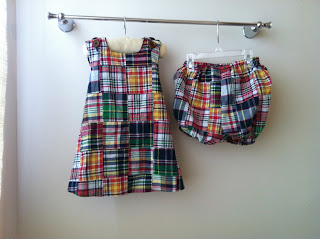 This sundress from McCalls seems to run a little large.  I had already decided to move the buttons from the yoke to the straps (and to round out the top of the yoke just to look nicer since it would now be on the outside) to accommodate for letting out as M grows.  I am glad that I did as this pattern ran big and I ended up taking up several inches of strap.  I was able to just tuck them under, but I did add a second button on each side to help hold them in place.  The bloomers are huge.  I did what I could with the elastic in the casings, but they are still way big.  Luckily, they cannot be seen under the dress since it is pretty long right now as well.  I did leave an opening in my casings and an extra inch or so of elastic so that I can let out the legs and waist next year. 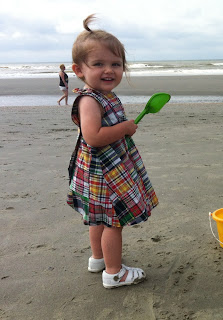 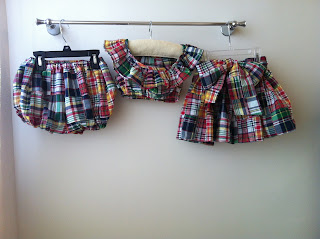 I am in love with this pattern.  It was still a little big for C, but I couldn't wait until next year, so I did what I could with alterations so that she could wear it this year and, hopefully, next.  I took some tucks at the back neckline, which aren't beautiful as the neckline is pretty stiff due to a layer of gathers stuffed under the bias binding.  However, they are mostly disguised by the ruffles and the busy material. I also reduced the elastic in the bloomers and the back of the skirt.  The sash helps too and the 4" hem will allow for letting out.  This patchwork madras was a little difficult to sew precisely due to all the bumpy seams, so I gladly ditched the iron and gauge for this project and did a lot of eyeballing.  Aside from fit alterations, the only other change was to self-line the sash (vs narrow hem), as the seams on the madras would have been unattractive when visible. 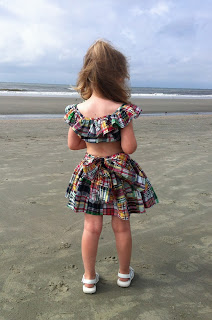 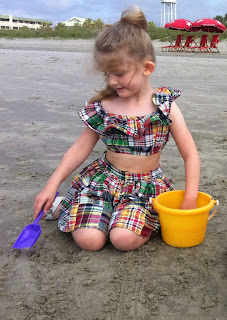 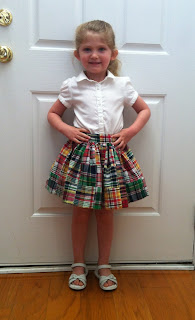 This beautiful patchwork madras was purchased from Three Chickadees Textiles